Sanjay Gandhi National Park - How to go, things to see, places to eat 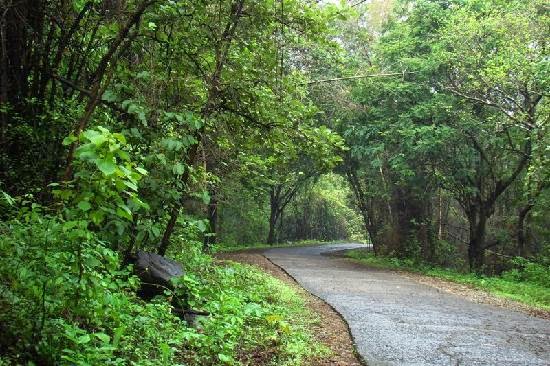 It had been a very long time since we went for an outing. Everyone was sure of one thing; no one was in a good shape for any trek or expedition. So, the plan had to be of moderate intensity. How about a cycling trip at good old SGNP? Recently, one of my friends had been there and had a lot to discuss about it. Obviously his experience and more importantly the photographs influenced me. Putting an idea to the group and convincing everyone's whims and fancies usually takes a toll. However, this time it was different. Everyone agreed almost immediately. So, that's how the plan came about and we were off to SGNP.

How to Go:
Sanjay Gandhi National Park is located in Borivali. In fact, it is also known as Borivali National park or simply National park. It is this huge green land that occupies a major portion of North  Mumbai. Although technically one may say it has entrances from different parts of city, the main entrance is at Borivali. Just 10 minutes' walk off a straight road from outside Borivali (E) station will lead you to SGNP entrance on the Western Express Highway. One may enter the park by purchasing an entry ticket of Rs. 10.

History : Long before any of this, right in the midst of the forests, the Kanheri caves offered a staying place for the traders who used to carry their wares from the sister ports Sopara and Kalyan. Later, the wandering Buddhists monks converted this place into 109 Buddhist caves, outcropping from a single basalt rock. The remnants are still present and in good shape too. In pre-Independence era it was also known as 'Krishnagiri National Park'

What is there to see :
Right near the entrance, we found a shop that rented cycles. Nice colourful bicycles of different sizes stood there waiting for their next riders, who incidentally happened to be us. They cost us Rs 50 for two hours. Soon we were busy in choosing the most suitable one, ensuring there were no issues with the cycles etc. We even tried riding them to get the feel. It almost felt like good old childhood days. Soon each one of us had chosen a nice bike and there we were, on our marks, got set and off we went...

After the initial lap, when each one of us tried to outrace the other, it was just a matter of time that we realized that cycling wasn't as easy as the last time we did, just a few twenty years ago. We took the necessary photo session and water breaks. Of course, we had to mark our territorial presence which was very important in the forest. So, we had to have breaks for that as well. We even egged each other on climbing a tree. I was definitely enticed into it, however, glad that I was able to pass the climb-a-tree test with flying colours.

We had taken the most popular Kanheri caves trail. It is a straight route from the entrance and then you take a sharp left. We were almost to the middle of it, when one of cycle's chains came off. After some failed attempts at give-that-thing-to-me-i-know-how-to-fix, the poor guy whose cycle was broken had to return to the shop to get a new one. While the rest of us had better things to do like taking photos of our ancestors. There were many monkeys in the park. Groups of them jumping, shrieking from one tree to the other. At the same time, another friend who was late initially arrived on a motorcycle. Yes, bikes are allowed in SGNP. Together we moved slowly so that the one who had gone back to get his cycle repaired or replaced could catch up. And as he joined us back, we were close to the Kanheri caves. Buddhist caricatures Kanheri caves are spread right in the middle of the park. There are some eating facilities near the entrance. We locked our cycles and decided to have some cool drinks. There is a nominal entry fee of 10 Rupees for the caves. The caves were numbered and authorities referred to the caves by their numbers. It is said that these entire range of caves was carved out of boulders. Each of these caves was different in size and probably importance as well. There is a tall statue of Buddha around 25-30 feet high. The cave in the centre had a huge inverted bell like structure, called stupa. Other significant sight in the same cave was the roof. It had paintings which still were pretty much in good shape with their colours’ intact. The people who painted them had very good knowledge of dyes. 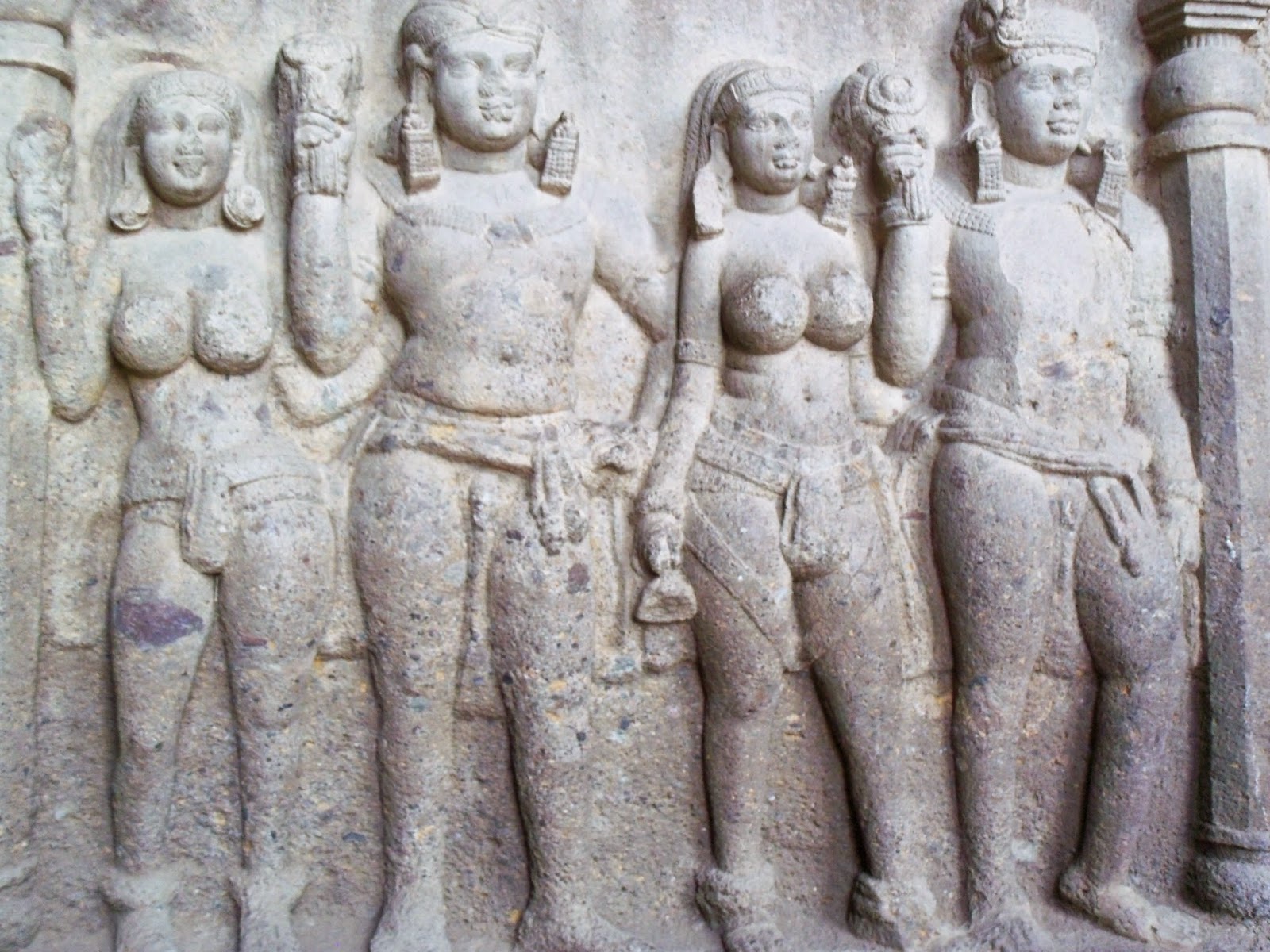 One of the caves was quite huge and looked as if it was a resting place of monks. However, the ambiance inside suggested the monks meditated there. The caves' caretaker gave out a loud call of बुद्धम शरणम गच्छामि "buddham sharanam gachaami" which resonated among the walls of the cave giving rise to tremendous energy which could be felt. After exploring and spending extended sessions of photography, we decided to climb up on top of the caves. There was a route to get on top of the caves from the backside. The view from the top of the caves was magnificent. One could see the towering skyscrapers of the West. On the other side, one could see the vast expanse of the park.We spent some time eating the snacks that we brought. 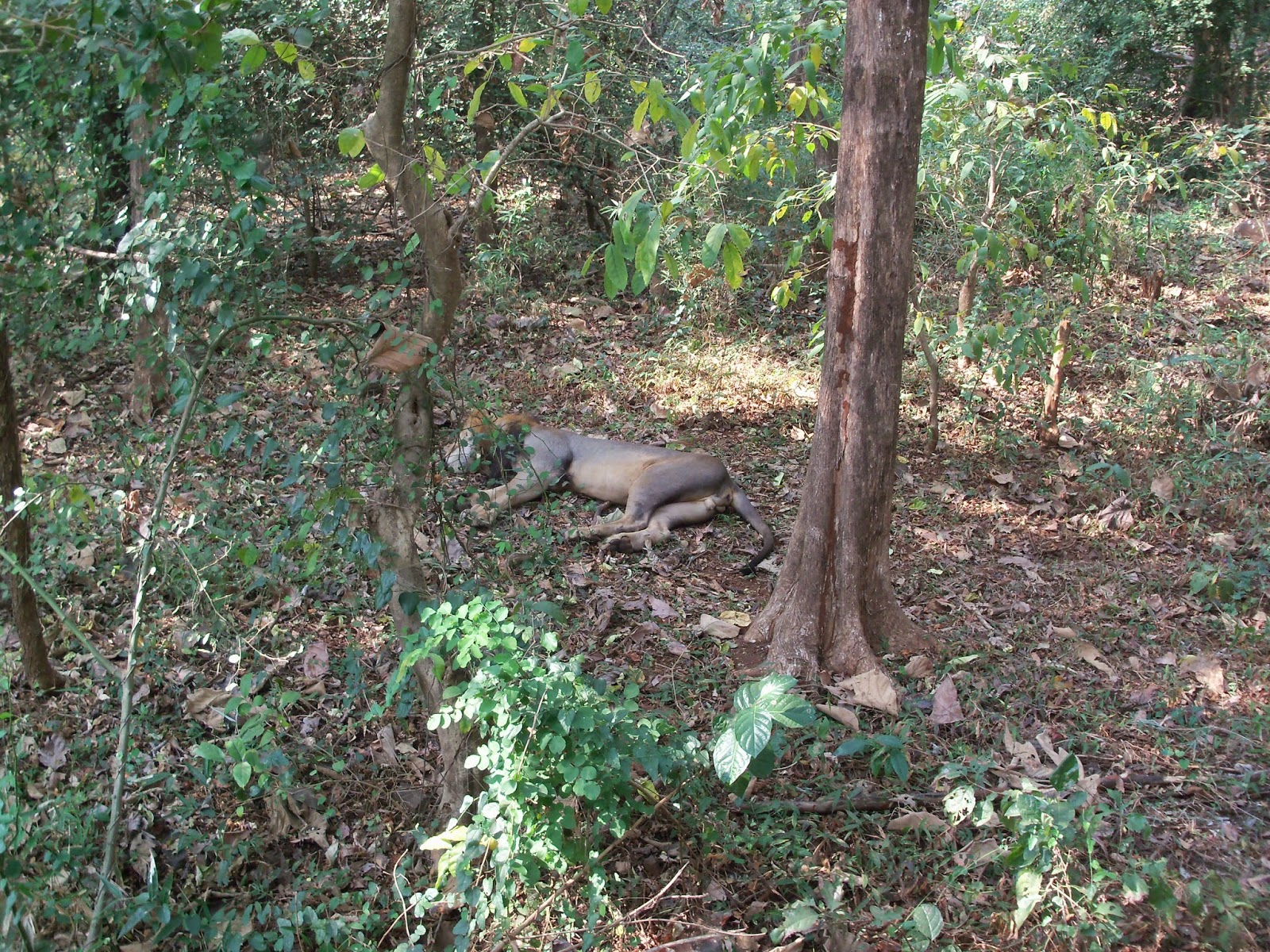 Tiger safari: We decided to wind up at Kanheri caves and return. On our way back we took a small detour and decided to take up the tiger safari. The park authorities had buses with grills for the safari. One had to wait in queue for the next trip. It was a long wait between each trip. Luckily we everyone managed to get on the same trip. There were kids on our trip. Naturally their excitement was infectious. Everyone was asked to keep their hands inside.The tiger and lion enclosure had a huge gate. The ones you see in movies like Jurassic Park. Slowly the gates opened, the excitement increased. Soon after entering the park, the bus raced through and stopped at an unassuming location. There was silence. The birds started chirping in a peculiar way. All of a sudden, the park attendant yelled at everyone, "To the right". Everyone looked out of the window intently,there it was, "the king of the jungle". It was siesta time for the lion. It almost seemed that it was strategically placed there, so that people could see it. It just turned its head, saw who was bothering him and again got back to his slumber. So much for the excitement. After that, we went to the tiger enclosure. The tigers were at a distance. We could see them playing in a pool of water. After a brief stay, enough for a few clicks, we were on own way back, pulling down curtains on our great day at SGNP. We promised we would be back again to explore the other trails in the future.

Summary : As we returned, one observation about the trip seemed to bother us all. The tigers at the park looked very thin, almost malnourished. Such is the sorry state of India's national parks. Encroachments all along the borders of national parks have rapidly changed the fabric of this dense green land. The intense pressure from businessmen, politicians & builder lobby is unstoppable, relentless to acquire this land mass. And, they are winning, in a mighty way. The trees, the animals, the flora, the fauna & the sounds may not last for another 50 years. But until then, like nature always does, SGNP will continue to awaken the child within...

References :
http://www.mumbaikarsforsgnp.com/history_of_mumbai.htm
http://en.wikipedia.org/wiki/Sanjay_Gandhi_National_Park
Posted by Time to travel at 7:00 AM 6 comments: