Kolhapur - How to go, places to visit, things to do 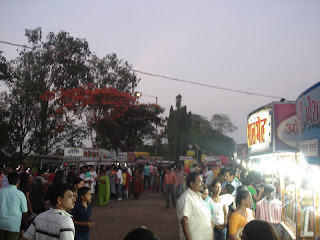 12th June'2010 : Kolhapur - a destination that usually would find it tough to get on most travellers' must-see list. However, a friend's marriage prompted us to have a visit to this southern Maharastrian city. Googling Kolhapur gave as an overview of places to visit, things to do. But, we weren't sure if we would get enough time to visit those places. Our plan was to leave on Saturday night and return either early Monday morning or late Sunday night, depending on the availability of buses. Private bus transport was chosen to be the mode of transport.
How to go : There are lot of private buses available to reach Kolhapur. redbus is a good place to book your tickets.It is the premier site for booking tickets for private transport(buses). You can purchase tickets to and from all parts of India on buses provided by different transport companies.Konduskar Travels was the transport company chosen.They provided Volvo buses to Kolhapur at regular intervals. It cost around Rs. 525 per ticket. The site sends you a confirmation e-ticket which you need to produce while getting on bus.
The bus started from Borivali picking up commuters from all across Mumbai. Cannot tell which route the bus traveled, had dozed off almost immediately. I guess the bus traveled via the western express highway before moving on to the eastern side.
If you are travelling your own vehicle, there are two routes that you can take to reach Kolhapur. NH4 or NH17. If you take the NH4 you would have to go via Pune, Satara, Karad.  If you take NH17 you would go through Panvel, Roha, Khed till Karad.
Places to Stay :  Reached Kolhapur bus stand around 5.30 am. Our friend had booked rooms for us in a nearby hotel named Majestic. Since others were arriving in a different bus, I checked into a room. Others who were on a different bus, were meant to arrive an hour later.Went to the bus stand after an hour to receive others.Had a cup of Kolhapuri chai' at a local tea stall.Was surprised to find that Kolhapuris love their tea sweet.Or was it just me.Anyway,The room was big one with four beds, a T.V. and bathroom attached.There was a provision for hot and cold water. Must say that the location of the hotel being central with bus stands(most private buses had starting points to various destinations just below the hotel), railway station and a lot of restaurants nearby to choose from made the hotel favorable.Rest, I would suggest you to check out the place on your own. 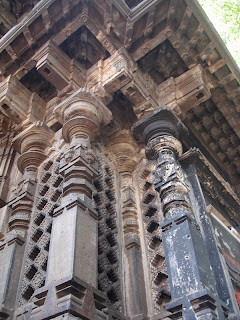 Places to visit : Autos seemed to be the common mode of transport in Kolhapur. We found ourselves an unusual auto to travel in. Behind the customary three-seater bench, there were two benches laid perpendicular on both sides. The structure was similar to imagine a Tata Sumo with an auto like portion in the front seat.The auto rickshaw costs were found to be nominal.We traveled a lot of places, the fare never went beyond Rs. 40-50.Perhaps, not being a huge city reduced the distance too.But then not every city is Mumbai.Also,There is no meter-system here. The fare depended on the deal you made at the start of journey.After attending the marriage, we visited the famous Mahalaxmi temple.
The visit started with purchase of some offerings.There was huge queue, but it was manageable.One noticable thing about Kolhapur is the heat. With Mumbai, being close to the sea, there is a lot of moisture in the air which helps to reduce the heat, but here in Kolhapur that's not the case.The Kolhapur heat really hits you. A prolonged moment out in the sun would probably cause some heat burn.Although there were shades provided in the queue, still, there were some unshaded portions.As a result, there were some occasions where we had to stand in queue in the Kolhapur heat on barefoot.The stoned tiles didn't help either.Must admit, it was not the most pleasant moment.
The temple was built during the shivaji times. The architecture of the temple is breath taking, pristine, ancient, it tells more about the Shivaji times. No wonder, you find a lot of devoteess turning up at the temple here.Although, the temple is still intact, there are some portions that are being restored.  As we approached the temple, the queue split into two - one for male devotees and the other for female.Even after entering the temple, the queue extends till the main diety statue. The pushing around only gets more intense as you approach the main diety. And its not even a moment that you pray that you are pushed away. Did make me think, visiting a temple should offer serenity and peace of mind and not this struggle.The temple authorities have tried their best to manage the crowd, I felt there could have been a lot more that could have been done.May be they could learn a thing or two from Shirdi. 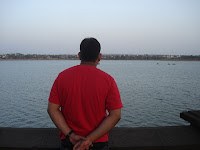 After our visit to the temple, we decided to take a break and travel back to the hotel to have a s-nap (short nap:).  It was around 4.30, all of us got ready to visit another famous place in Kolhapur - the Rankala lake.It took us 20 mins to reach the lake by auto. In tems of size it was slightly smaller than the Powai lake. However, there was a lot more activity happening out there. There was a lot of crowd. People of all ages enjoying the nice atmosphere around the lake.There is a walking track around the lake. The lake looked clear by normal standards. There was a stretch near one end of the lake, which extended almost to the middle of the lake. People could walk almost upto to the center on that stretch.Then there were the eateries at one end. Bhelpuris, Panipuris, Baloon shooting stalls, bubble sellers. Almost all the elements that make up a normal indian mela were present there.After our share of shooting ,We tried out a special bhel known as the "Indian bhel". We asked the vendor to make it spicy. And boy!! Was it spicy !!!We then had one of the most popular items - "The Falooda" from one of the Mewad icecream walas present there. There were options for chocloate, vanilla, stawberry, mix.Truly Mewad originally from Rajasthan have some sort of monopoly on faloodas and icecreams in these parts and now we knew why? The falooda was just too good.Each one of us had an extra helping.It was around 6.30 pm we left for hotel again. 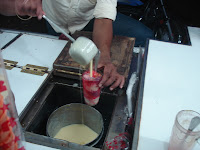 Places to Eat : We decided to have an early dinner.Just near the hotel, on the other side of the building across, there was a restaurant named "Saawan".The non-vegetarians in the group tried out the special non-veg thali, which seemed to be a specialty there.And they tell me, it was just yummy - the kheema bhaji, the masala in each of the bhajis had an entirely different taste, probably a special kolhapuri touch to it. No wonder they just enjoyed it thoroughly.Also, there was  a special thaak (kind of buttermilk), they really seemed to enjoy it.I had to contend with regular veg. mixed bhaji and chapatis.After we completed our sumptuous dinner, there was hardly any time to do anything else. We had to just pack up and leave.Reached hotel, packed up and off to go. 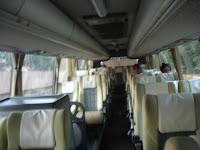 Return Journey : The return journey was a rather short one. We again traveled by Volvo, this time it was a brand new Neeta Volvo.They charged us around Rs. 800. The journey started around 10.30 pm. Most of the journey was spent in dozing.The bus reached Borivali around 6.30 am.An rather short trip - a few places missed out - the Panhala fort, Vishalgad..probably some other time. Hope this helps you on your trip to Kolhapur.
Posted by Time to travel at 11:34 PM 5 comments: