Prelude: It had been a long day of travel. It turned to pitch dark. With no pollution or lights in the mountains, the night skies are clear & the night appears darker than in the cities. I was trying to catch a few doses of sleep. One friend was busy on his phone. Whereas the other was talking to his wife, assuring her that he was fine, and not having too much fun. Not sure if that is even possible in an all guys trip, especially when another friend is yelling in the background, "Abey, volume bada naa !! " (Turn up the volume) And definitely not, when the song playing in the background is of the Punjabi rock star, Sukhbir.

That's when the guy seated next to the driver said, "Has anybody else noticed, it's been some time since a car passed us either way".

Everyone stopped whatever they were doing and looked at him.

A friend asked the driver, "bhaiyya, hum sahi jaa rahein hain naa?". (Bro, Are we on the right track?)
The driver responded in his typical style, "Hain ? ". (What?)

The friend showed him his phone and said, "Google Maps kuch aur bata raha hain". (Google Maps is showing something else).

The driver said, "Pata nahin sir, main to pehli baar Kedarnath jaa raha hoon". (Don't know sir, I am travelling to Kedarnath, the first time). Everyone was left stunned at that admission. 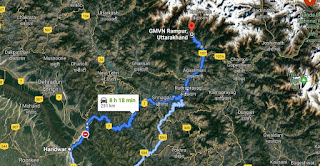 Earlier in the day, I was in Haridwar, waiting for my friends to arrive. With the hope of a good night's rest, I had dozed off the previous night. Unfortunately, the rest was not to be, the electricity went off a few times & to make matters worse, the generator wasn't working.  Finally, after the hotel guys managed to fix it, I closed my eyes for the elusive sleep. Suddenly, I received a call, it was from my friend, it was already 6:00 AM. So, not exactly, the rest I was hoping for. They didn't have a good night's rest either. Their train was late by an hour. I went to the station to receive them. After the reunion, I took them to our agent's office. They left their luggage there. As we had to quickly get moving towards Rampur, where we had accommodation booked in GMVN, we contemplated splitting up. We were discussing whether a few would go over to the public restrooms and remaining to the hotel room. That's when, one of the friends, called out, "I would take bath in the Ganges".  With that statement, our discussion concluded.

Yes, everyone decided to take a bath in the Ganga. To be in Haridwar, and not take a bath in the Ganga, we couldn't let that happen. So much has been talked, read about the river Ganga, for us, this was the first sight of the river Ganga up close. From the station, we took a shared rickshaw (Rs. 20/- per seat). We reached Har-ki-pauri, the famous ghat on the riverbank of Ganga. Our rickshaw left us a few 100 meters from the ghat. As we walked towards the ghats, we saw a lot of makeshift tents of nomads, babas, some eateries, shops selling plastic & bronze containers. Most people carry the holy Ganga water. And soon we reached the ghat.

What a majestic sight it was. Had never seen a river flowing with such calmness and elegance. There was a certain feeling of peace looking at the river flowing with such nonchalance. The authorities had tied up chains, next to the bank, so that people can catch hold of it while bathing so that they don't get swept away. Soon, we too got into it and took the dip into the holy river, three times to be precise. It wasn't the most comfortable experience though. Wondering why? Oh, forgot to mention, the water was damn cold!! Still, it was an experience worth remembering. Taking a bath in the Ganges is often said to provide spiritual and health benefits. We were definitely energized for our onward journey. So energized, that one friend started doing yoga on the banks. No, that's not funny, what is funny - a crowd quickly gathered there to watch him in action.


Soon, we left for our hotel, packed our bags, had some light breakfast. And by 10-11, we were off on our journey. We were greeted with traffic on NH34. There was a patch near Haridwar, which took us a couple of hours to cross.  It was so bad that we often used to get off the vehicle and wait for the traffic to get moving. After we experienced exactly what our agent warned us of, we were on our way, as soon as we crossed that patch. The roads were under construction as part of the Char Dham Expressway construction, that started in 2016. We had our lunch at Sainik Hotel Delux. The owner pretty much had his entire family managing the hotel. Apparently, his son, who was a full-time doctor, was taking orders for the day. We enquired about traditional Garhwal meal, for which he explained it needed to be planned in advance & hotels usually serve only the most ordered meals. We had the regular Punjabi food, topped up with a glass of buttermilk. The food was OK.

There were some beautiful sights along the way, but, none better than the creation of Ganga itself. Yes, Devprayag it was. If Ganga was subtle and peaceful in Haridwar, here, which was, slightly higher up, it was ferocious. It was the confluence of two rivers, the Alaknanda and Bhagirathi. Both had distinct colours. Alaknanda was slightly greener and Bhagirathi had a brownish colour to it. And their confluence and turning into Ganga was a spell bounding sight. We naturally got down and took some pictures. Also, must mention another sight, Alaknanda beach which we visited in the evening. It had a surreal feel to the place. We had tea and biscuits in a small eatery there. We spent much part of the journey being the DJ, playing songs of their choice, a role that was rotated every hour.

Travel can be boring after a while, but, not for us. Especially, late in the night, when we realized no vehicle had passed us for nearly half n hour, and after the driver admitted, it was his first visit to Kedarnath. Google Maps in the mountains can get confusing. But, then, we realized even the Maps weren't working. The driver did admit, he might have missed a turn. Good, that was a relief which soon disappeared when he also admitted, he didn't know where he missed it. We definitely knew we were off the track, because, we couldn't see the road, as much of it, was covered with water and snow. We were just about to lose our minds when a car appeared out of nowhere. We asked the driver of the other vehicle, the route to Kedarnath. He concurred with what our driver had admitted earlier, we indeed had a missed a turn. He guided our driver to follow him & soon reached our route. We lost an hour in this detour. Had we continued on the wrong route, we would have reached Ukhimath.

We laughed off the matter and started focussing on better things to come like our Yatra next day, hoping the rest of the journey to be easy and calm without any further drama. But, it was not to be. We had to cross a very thin patch of road, where only one vehicle could go. On one side was the mountain and valley on the other. There was a huge traffic jam over there. One of the friend got pissed and shot off, "That's why it's not advisable to travel in the night in Uttarakhand ".  It might have been quite late in the night, but everyone was damn awake with rapt attention to watch the driver make turns with utmost care. Obviously, one wrong turn, we would have reached Lord Shiva rather quicker. But, these drivers are truly skilled ones. But, not the one who was in the bus ahead. It was a yatra bus from Delhi. And city drivers generally have very little clue of driving in the mountains. He chickened out & was unable to proceed, which actually caused the huge jam. It took some local driver to get out of his vehicle and guide the poor guy. And soon, the jam cleared, and we also move ahead.

We reached GMVN hotel, Rampur (Ph No. - 9868006646) at 1100 PM and checked-in to our cottages. The cottages were on the edge of the mountains. We could hear the whispering sound of the river flowing. It was extremely cold. We had some light dinner. As it was the Yatra season, the kitchen ran 24 * 7. There were some people in the hotel who completed the Kedarnath journey. We gathered some information from them, we had to reach Sonprayag first, from there, take the shared vehicle to Gaurikund. It was from Gaurikund where we would get the horses & was the starting point of the Kedarnath trek. One yatri who had completed the Kedarnath Yatra had warned us of lot of snow along the tracks. Some elderly people had returned back as they couldn't find any horses. They advised us to leave early around 3 AM, in case, we needed to book any horses. However, we were not in a state to get up that early. As we were all tired, with the long journey, we decided to sleep till 4.00 AM and leave by 5.00 AM, the next day. We needed some rest. Whether it was the right decision or not, only time could tell. We packed for the next day, one small bag to carry, rest to leave in the car. We all went off to sleep, all excited for the big day. We already had enough adventures for the day, what will the next day bring. This was it.

Just like the kids in the movie Jumanji hear the beat of the drums, we began to hear, the beat of Shivji's Damru....babam bam Bhole...!!!