Vasai Fort - How to go, places to visit, things to do

Vasai Fort : June 27, 2009: It was a sudden decision to meet, a few phone calls we (a group of 5).decided to meet at Vasai station, we planned to meet at 1.00 but ended up meeting at around 2.30 p.m.  So after having a meal at one of the hotels near the station Vasai (West), we began our journey to Vasai Fort.
How to get there : When you reach the station, you need to go to Vasai(west) to catch an rickshaw which shall take you to Vasai(Fort).There are S.T. buses which ply between Vasai Fort and station, and the frequency is not too bad.We, however, took an auto.(4 can be accommodated in an auto). Although, in our case, it was just 3, as the other two(a couple) came via their bike, which was following us closely.So, the journey began, after few minutes of getting out of the hustle and bustle of the station area, we were on our way to Vasai Fort.On the way, you come across the station Naigaon,on the left, open fields on both sides, you call it "khaadi" by the way. The journey was smooth, nothing to talk about, until you get into Vasai fort, where the autorickshaw driver stops i.e at the S.T bus stand-cum-auto rickshaw stand.It cost us around 40 rupees. Our biked-couple had parked their bike nearby, its safe to park there by the way.As, we found our bike in its place, when we returned from the excursion. :). The Vasai Fort exploration begins..... 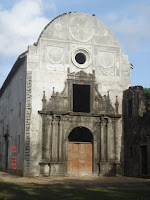 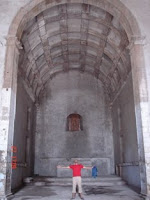 What is there to see : There are four parts to explore in and around Vasai Fort.As you reach, Vasai Fort, the autorickshaw driver takes you to the left, and parks it there, for the first leg, you need to walk in the opposite direction i.e towards the right, you come across the church, actually you can see it from a distance, so not a problem locating it. On the way you see trees(must be banyan trees, not sure) with large vines hanging. Also, there is a small ground on the left hand side, where you see some local kids trying their hand at being a dhoni or sehwag, yeah playing cricket, very often its the case. 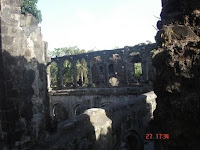 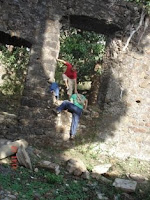 Holy Church About the church, you can see that its being renovated, by the ASI. Not sure what the name is, from the web, I could find out that , its called the Holy Name church.As you enter, you see the church is actually in quite good shape.The empty altar, the ceiling which was restructured by ASI.The size of the church is so huge, you would know that, when you hear, the echo of your whispers.The backside of the church is a place worth exploring.The ruins are vast.You can actually climb to the upper tier, but be careful, don't try from the staircase on the left, the staircase ends mid-way. -columns missing But, if you try from the right side, you can climb up, the stairs are good,and actually you can see the inside of the church from the window/door there. We tried pushing one friend from there ;) (Only through images though).It never fails to amaze how people used to build, live in these forts.And how time has got the better of them and these structures. 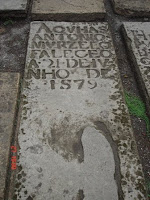 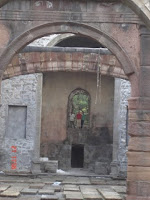 Kambakth Ishq After exploring the back side of the church,we start walking along the trail on the right side of the church.i.e. going even further from where we initially started.There you take a turn, and keep walking, until you come across another part of the ruins. Its a church like structure with an open space, in the center with graves all around. The graves dating back to the 14th century. Obviously belonging to the Portuguese kings and queen.This fort was built by the Portuguese, if you didn't know that.Did I mention this is the famous place where the famous Urmila song "Kambakth Ishq" was shot.Its only then you realize they actually shot all the dance sequences on the graves!!!!Well, the portuguese are not going to like it!!!The rock structures are unique here, i.e. the walls. We ended up shooting a lot of pictures against this background. 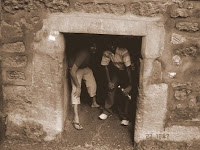 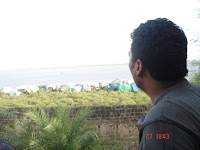 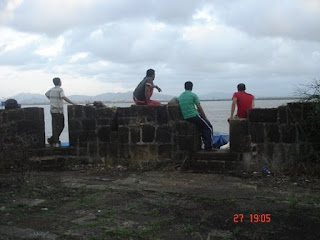 Staircase to Heaven From there, we walk back to the ST/auto stand, going past the church on our way.From here, we walk further left, its a small walk, along the trail, make sure you do this journey in the day time.Well the entire journey should be made in daylight.Anyway, dont be too confused, as you may be, you just need to turn left, and right again and keep walking by the trail, until you come by another beautiful part of the fort. A ruin, yet again being renovated by ASI.Well, they are getting cement to fill all the cervices..must be lack of funds, the entry in this is restricted, no, we didn't have anyone stopping us, but all the entrances to it was covered with thorny plants, must have been done by the ASI. Or may be just to prevent any vehicles from getting there. However, a small gap in the through thorny bushes, helped us get it.On one corner, you find a small opening to a stair case.Mind your head here, its not the usual staircase.So, be careful as you go up. Its 3 storeys high.You are sure to find some lonely couples on the way up.Vasai fort is famous for such visuals. ;) But ,when you reach the top, the view is just spectacular..!! You can see the arabian sea.,the Vasai-Bhayendar rail bridge, Utan . The view just too serene, beautiful.After spending some time, we explored other parts of this section. Serene is the word. Waves washing away at the mangroves,the sun almost down,the clouds.It was a surreal experience. After spending some time exploring, and just enjoying the place.We got into other parts of this section,one section being better thatn the other.We started clicking some beautiful pictures.Some of them really came out well,especially the ones which were of DCH-style. 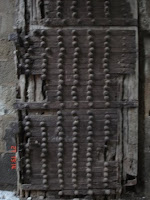 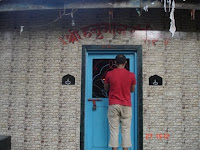 Jetty and temple Finally we began our last and final leg, walking further ahead, we reached a Hanuman temple right inside the fort. After praying there for a couple of minutes, we came across our exit. In olden days, there was never a sign saying exit, but a huge 10-15 foot iron gate!!!Yeah, its a unique piece of structure. And actually it still holds strong.No, its not used, but it doesn't appear to be rusted or anything.
As we came out of the fort, the all we could hear was the waves of the sea. We walked towards the jetty, which was to the right. There were a lot of people there. Just enjoying natures gifts to the planet.There were some boats on the sides.Not sure if they are used now.After, clicking a few pics, we started our trip back.


Return journey:We walked back through the iron gate, walking past the hanuman temple, going past  the staircase structure, turning up at the ST bus stand.We heard a ST bus roaring, this made us all run towards it. It was frentic chase, and we got into it, by the whisker.We love doing these kinds of things. And thats it, just like that, our trip ended. It was a simple trip filled with history, exploration and fun-filled and  we ended with a lot of picturesque photos and more importantly with great memories.

If you are looking for a simple trip, make sure to make it to the Vasai Fort.Hope you have a fun time.
Posted by Time to travel at 9:21 PM