Karnala Bird Sanctuary - How to go, Things to do

Note to readers : Its been a long time since we published any new blog. In spite of that, we have been receiving a lot of feedback from readers over the years. A big thanks to all.  Never thought the blog would be so well received. OK, now to clear some old backlogs.

Karnala Bird Sanctuary : It was the first trek of the monsoon season. As usual, the trek featured on the YHAI trekking (Mumbai unit) monsoon schedule. We had been with them on earlier treks. It is a fun group to be with. And what more, they are a knowledgeable bunch too.  The trekking location was extremely close to Mumbai, its a Mumbai trekker's must visit place. Its hard to believe such a trekking destination exists so close to Mumbai. Yes, we are talking about Karnala Bird Sanctuary. It featured as a trek that had a difficulty level that ranged from easy to moderate. Our initial thoughts were how difficult would be a bird sanctuary, that's when we realized there is a fort around which this sanctuary was built - The Karnala fort. We hoped the trek to Karnala fort shall be the start of a new season of treks.

History : When you talk about the fort, most people know about Karnala is that, it was probably some fort that was either conquered or built by Raje Shivaji. Perhaps, you can say the same for most forts in Maharashtra. But, beyond that a lot is unknown about Karnala fort. In olden days, it was said to have strategic importance. Looking at how the control changed hands from Devagiri Yadavs, Tuglaqs, Gujarat Sultanate, Portuguese, The Nizam of Ahmednagar, Shivaji Raje, The Mughals to British East India company makes one think, "What was so special about this fort ?"
In ancient times, India traded with countries like Syria, Egypt and pretty much the entire middle east. The goods from these countries obviously used to land on the ports of Gujarat and Sopara. In order to transport these goods, mostly on foot & horse, the  Bor Pass was the only way that one could get them from sea ports to the interiors of Maharashtra.  Which meant the one who controlled the fort, pretty much controlled Bor Pass. No wonder, many battles took place for the control of this very fort. The British East India company eventually built a railway line in the Bor Pass for easy transport of goods. This also meant the strategic nature of the Karnala fort was no longer important. And as the fort lost its importance, it remained unused, the biodiversity of plants and most importantly birds in the area around must have slowly changed over the decades making it home to some of the diverse species of birds and eventually it was declared a bird sanctuary at some point of time, which still stands even today.

How to go : Located on the Mumbai-Goa Highway, Karnala Bird Sanctuary is located just around 15 km from Panvel station. In case you are travelling by private vehicle, take the NH17. As soon as you go past the urban areas of Panvel, look for a protruding thumb like structure on the eastern side. You could also look for the Karnala Bird Sanctuary sign board itself. And of course the locals are always helpful.

Public Transport : We had gone using public transport.We assembled at Panvel station on Mumbai's suburban harbour line. The trekkers arrived from various parts of Mumbai. After the initial introduction, we were all off to Karnala bird sanctuary via local auto rickshaws that carried around 6-7 passengers. It cost us around Rs 10.00 per seat. The frequency reduces after 6 pm. So, one is advised to wrap up ASAP and mostly you be able to wrap up as well. On the way, we stopped over at Dutta Wada Pav centre. It is the famous wada pav centre, which is "the eatery" of anyone who is in for a long drive on Mumbai-Goa road. After having a good breakfast, we were back on the road to Karnala bird sanctuary. 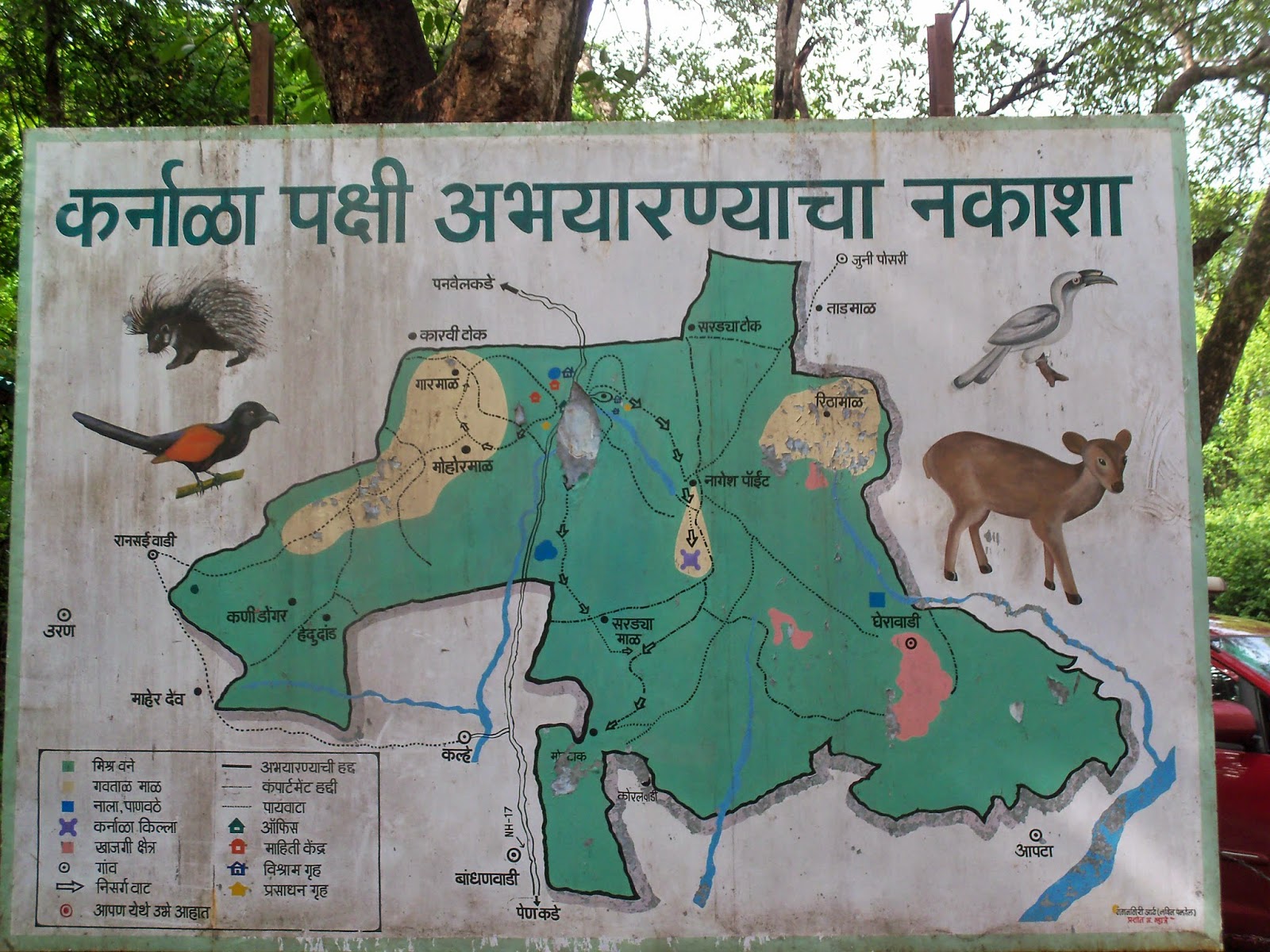 Entrance : Within 15-20 minutes we were at the entrance of Karnala bird sanctuary. There was a huge parking lot present. The entry fees to the sanctuary was around Rs. 20. One thing good about Karnala was, the authorities were keen to preserve the nature. If one had to carry a plastic bottle one had to make a deposit of Rs. 50 and register in their log near the entrance.The deposit would be returned only if you manage to get the plastic bottle on your way back. Quite a neat and effective way to ensure no throwing of plastic.
What is there to see :
Right at the start of the trek, there were a few bird cages that had a few species of commonly found birds.Initially our thoughts were, is this the reason why it is called a bird sanctuary, then why so few birds? Truly speaking, one had these vivid imagination that there would be birds all around the park. We would get a lot of birding snaps. Unfortunately, the birds in the cage were the only ones that caught our eye.There must be a lot of birds in the sanctuary, but our eyes were not trained enough to spot them.We got our first lesson in birding. One has to be extremely patient about it. As the trail started, we were greeted by a tar road leading up to the interiors of the sanctuary. Although, we were ascending, it never gave you a feeling of ascent, rather a smooth walk. The walk was surrounded by tall trees. One could hear different sounds of birds all along our trail, evoking similar calls from the trekkers, getting the birds even more vocal. Perhaps they were some mating calls.

At the base of the fort :
As the tar road concluded, we were in the midst of the dense part of the sanctuary. The trees got taller, closer to each other. Even the sounds of birds grew clearer, louder. That's when a light drizzle started. And soon, we reached a straight and clear route which led to the fort. All along what was hidden behind the tall trees, this tall, dark structure peeked out starting at us. We were at the base of the Karnala fort. On right side of the straight path to the fort, just near its base, the views were spectacular. One could see the entire sanctuary from there. Naturally, the scenes provoked some of the fellow trekkers to take some snaps in the titanic pose. There is also a temple of Goddess Karnai near the base the fort. Most of the trekkers prayed for a moment or two.

The final ascent :
The climb to the fort from the base of the fort was slightly tricky one. On one side was earth and on the other side there was a free fall. Although, it wasn't dangerous, one could only fall back to the base of the fort. That's when the organizers stepped in. They placed their volunteers at strategic places, so as to help fellow trekkers valuable support. Even at the entrance, it was their volunteers who stood there and gave hand to every trekker to get in. And there we were, one by one each of the trekkers entered the Karnala fort. 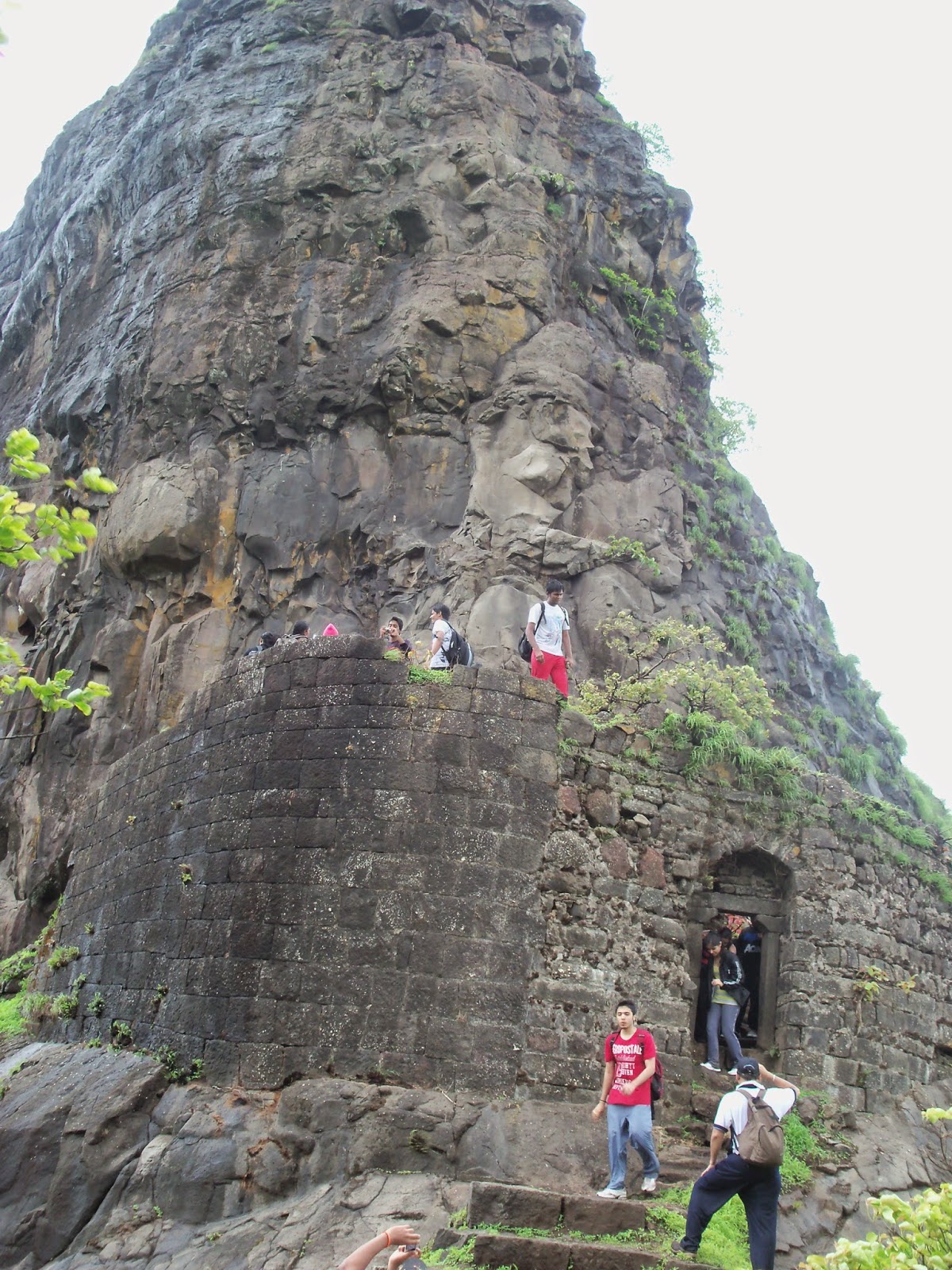 Within the fort : After passing through a series of openings, with a little jumps here and there, we were in front of the central structure of the fort, which was a tall pillar like structure, always known as pinnacle. In olden days, it was used as the watch tower. Climbing on the pinnacle was not allowed, as it is said to have taken lives of the climbers.  There were two water holes right next to the pinnacle. One must acknowledge our ancestors, every fort you go, how they used to store water in indigenous but enterprising ways. To pass from one section of the fort to other one had to pass through a corridor, with free falls on both sides. The wind were a lot stronger in those corridors, which made it difficult to pass from one section to the other. There was an open space at the far end of the fort. Most of us went to the other end. It was an open & plain land, we had our lunch there. We spent rest of the afternoon relaxing on the plains, where as some of the more enthusiastic lot continue to take more pictures, explored places around the fort.

Return : After getting out of the fort, with the help of the volunteers, we started our return. The way back down to the entrance of the sanctuary was quite easy. In fact, we reached the entrance in less than an hour. Everyone washed up, and then posed for one big happy group photo. Overall it was a relaxing trek. We can never imagine how crucial this fort may have been in olden days, however, the number of times it changed hands itself tells a lot about the fort's importance in those times. Even present day, attempts to conquer this land continues to happen with builders, politicians alike having an eye on this piece of history. Before that happens, do make a visit to the most pleasant and cheerful fort close to Mumbai.


References :
http://en.wikipedia.org/wiki/Karnala_Fort
http://wikitravel.org/en/Karnala_Bird_Sanctuary
Posted by Time to travel at 10:23 AM